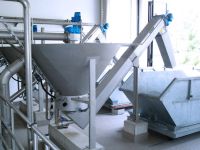 The grit/water mixture is fed in via the inlet flange of the grit wash tank. Organic matter is held in suspension and floated off while the grit is settled in the container.

With the addition of water, the sedimented grit is separated from the remaining organic constituents using a stirring device and up-current technique. The grit is removed from the container, de-watered and discharged via a discharge screw.

With the addition of a bunker at the upstream side, the grit wash unit can be extended to become a reception station for sewer grit. If a fractionating and washing drum is positioned between the bunker and the wash unit, the installation can be additionally used for conditioning street sweepings.