These large-scale plant, located on the Blue Nile, supplied three neighborhoods and had to be overhauled after decades of operation. MENA-Water renewed the entire system and extended the capacity to double.

On 22 January 2013, the renovated facility was rededicated in a ceremony by the Vice President of Sudan. It has grown after enlargement by MENA Water the largest plant of the Sudan and the second largest drinking water treatment plant in Africa.

The aim of the project was to refurbish all the water treatment facilities and to increase the capacity of the plant to 300.000 m³/d. The general concept was based on centralizing the intake of the plant by construction of a new Mixing and Distribution Chamber in order to have more flexibility for operation and maintenance. To increase the intake flow existing pumps were either complete overhauled or replaced by new pumps with higher flow. To minimize the energy consumption gravity lines were implemented.

more Information
at DownloadThis was accomplished through installation of new pipe lines from and to the new Main Mixing Chamber. All clariflocculators underwent rehabilitation and complete overhaul followed by installation of lamella settlers, which resulted in increase of settling area and reduction of the required retention time. As a positive effect the loads on the upgraded or new constructed sand filters were significantly reduced. For the distribution of the additional gained capacity a new low lift station was constructed serving Bahri and Haj Yousif. To ease and better control of the operation new process / flow control equipment were installed and automatic back wash for sand filters was implemented.

After rehabilitation and upgrade, the plant provides at least 300.000 m³/day of the cleanest potable water available in Sudan. The project started in 2010 and will be accomplished by the end of 2012. 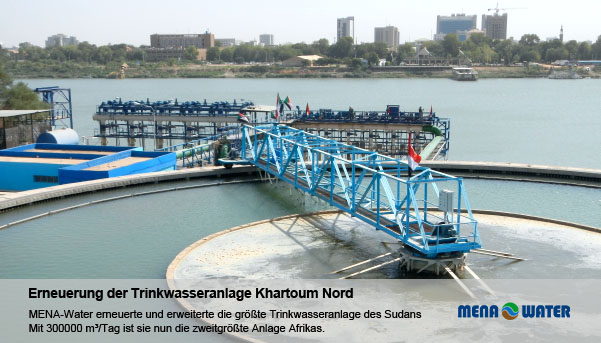